Bandwidth: Music channels use 192 kilobits/second. Channels carrying mainly speech and phone-ins don't need such high quality and they use as little as 80 kilobits/second. These figures can change at different times of day as the broadcast content changes.

Data Streams: DAB multiplexes can also carry data streams. 32 kilobits per second is a typical data rate. This is used for the station ID and for information about the music, artist, track or other program content.

Here is a downloadable video of a DRM broadcast. There are no nasty effects on the sound. The red, blue and black array of dots is a visual representation of the Quadrature Amplitude Modulation data stream.

Compare this analogue AM sample with the DRM above. The quality is quite nasty. There is a high pitched audible heterodyne whistle and periods of deep signal fading causing serious distortion.

This is very similar to DAB described above but it is designed to work on the MF and HF bands. Each digital transmission occupies the same bandwidth as a traditional AM transmission. The sound quality of the decoded data stream is far superior to AM radio. The transmitters can send audio data and digital data allowing programme schedules and other data to be transmitted alongside the audio. This is a simplified version of the "red button" service available with digital TV.

The screen shot below shows the output from a short wave receiver being decoded by the sound card in a computer. Software called DREAM is used to decode the data stream. 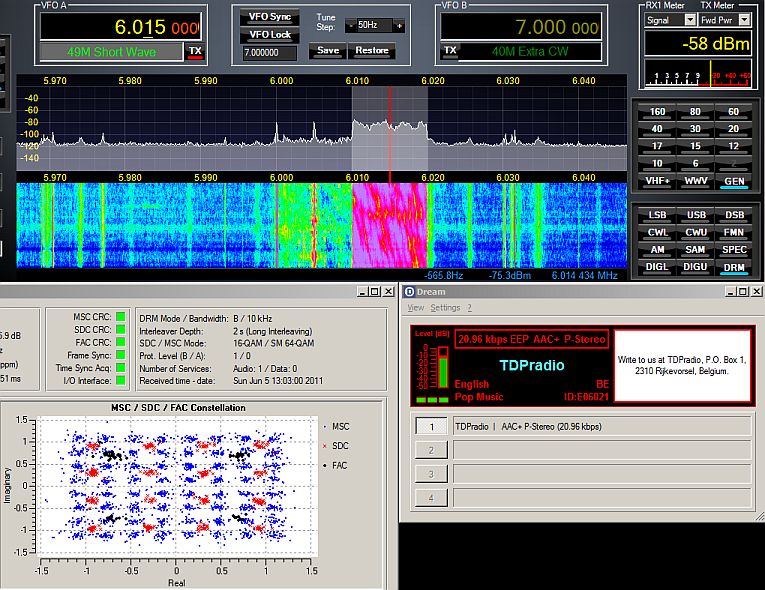 To receive DRM using the Dream software, a modified superhet receiver is needed. The blue RF stages and red IF stages are identical to a normal superhet receiver. Instead of demodulating the IF, a second mixer is needed. Its output is on 12kHz. The bandwidth is 10kHz spanning frequencies from 7 to 17kHz. (All these frequencies are audible). This audio signal is demodulated using the computer sound card and processing power from the computer's CPU.