This gives a feel for what happens in an antenna. In the animation, the electron movement is greatly exaggerated. In real life, each electron moves fractions of a millimetre but there are huge numbers of electrons moving.

Calculating Wavelength and the Length of a Dipole

λ is the wavelength. This is the Greek letter Lambda.

The half wave dipole will be 1.5 metres long for the 100MHz FM radio band.

This diagram shows the electric and magnetic components at right angles to each other and in phase. The electromagnetic radiation is produced by the acceleration of charge. The dipole antenna used to radiate this would also be vertical.

A vertical car radio antenna will receive vertically polarised waves best. In fact the FM band transmissions use circular polarisation so the antenna orientation does not matter.

The antenna impedance must match the feeder cable impedance.

When the impedance is matched ... 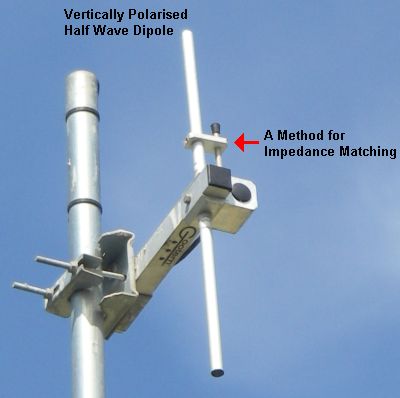 Measure the voltage and current at the feed point (where the co-axial cable is connected).

The result will be about 50 or 75 Ohms depending on the antenna and the type of co-axial cable.

Similar measurements can be made along the co-axial cable. If a matched cable is being used, the result will be about 50 or 75 Ohms.

If the wrong type of cable is used ...

A circularly polarised small-boy-steerable antenna for satellite tracking in the 136 - 138 MHz VHF satellite band. This was used at Douai School to receive weather pictures from one of the low earth orbit satellites in around 1970. I believe this school was the first UK site to decode the weather pictures, even beating the Met' Office. 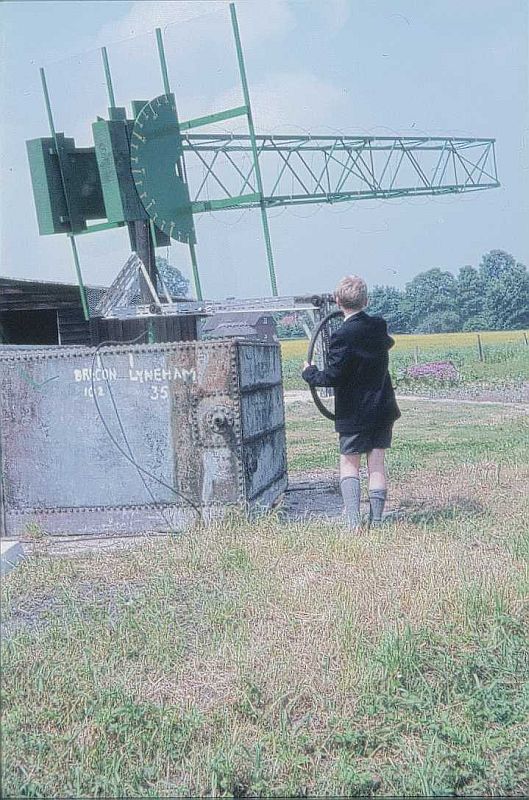 These are based on the half wave dipole but the other elements make the antenna directional. In the forward direction, they work much better than a dipole. In other directions they are much less efficient than a dipole. The connection of the co-axial cable is usually more complex than shown to maximise the transfer of energy from the antenna to the feeder cable.

And here is a vertically polarised Yagi antenna used for remote power line switching. This antenna is quite directional. It works better in the wanted direction as well as rejecting signals from the wrong direction. 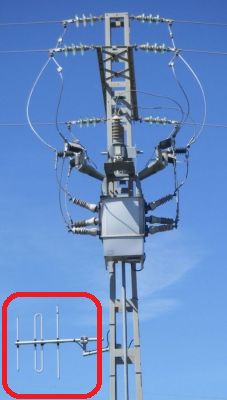 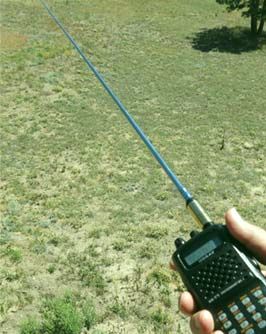 This antenna is a quarter of a wavelength long and is often vertical. The antenna relies on a mirror effect to work. Here the mirror is the users own body. This is safe for low powers. Metal car bodies work well and for large antennas, the earth itself. The antenna and the mirror image behave very like a half wave dipole. Telescopic radio aerials work on this principle. For example a car's aerial will be about a quarter wave long and the car body acts as the earth to provide the mirror image. For the 100 MHz FM radio band, the antenna will be about 75 cm long and a bit shorter for DAB radio.

The antenna is coiled and encased in rubber. It's springy and bendy. It behaves as a quarter wave but the coiling means it takes up less space. It's a bit less efficient than a straight wire quarter wave.