LEDs emit light, when they are forward biased and the applied forward voltage Vf is sufficient for a few milliamps to flow. (About 2 V)

In the circuit below, the resistor limits the current through the LED to a safe level. A typical LED current is 10mA.

This circuit has a 5 Volt supply. There are 2 Volts across the LED. The remaining 3 Volts are across the resistor. Using Ohm's law ...

Allowing a small safety margin, the E24 330R was chosen allowing just under 10mA to flow.

This circuit has a 5 Volt supply. There are 2 Volts across the LED. The remaining 3 Volts are across the resistor.

This circuit has a 5 Volt supply. There are 2 Volts across the LED.

This circuit has a 5 Volt supply.

The graph below shows the approximate characteristics of an LED.
The reverse leakage current has been exaggerated to make it show on the graph.
The reverse breakdown voltage is quite low (5 volts approx).
It's easy to destroy LEDs. Too much forward current or too much reverse voltage will do the job.

This uses Gallium arsenide instead of Silicon as the semiconductor material. 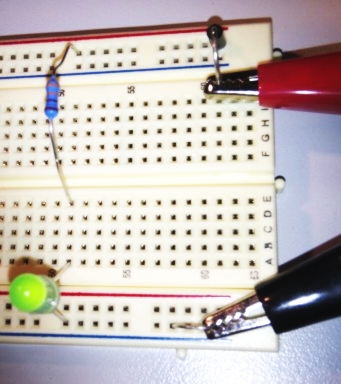 This is a bad idea. The current limiting resistor sets the total current which is shared between the LEDs. The same fixed current is split between how ever many LEDs are turned on. One LED might hog the current because the warmest LED will carry the most current so it also stays the warmest. The voltage across LEDs is about two volts. This stays the same if several LEDs are connected in parallel. Connecting a fourth LED in parallel does not increase the total current. It just makes all the LEDs dimmer because the same current is shared between more LEDs.

In this simulation, the LED dimming can be seen but is not obvoius. The current increase is tiny, as expected.

LEDs in series work just fine unless there are too many and the power supply voltage is no longer sufficient.